China has laws. China enforces its laws. Like pretty much every country in the world, China enforces its laws unevenly. By unevenly, I mean that it is not uncommon for China to enact a law and then not enforce it for a few years and then all of a sudden start zealously enforce it. Conversely, China will sometimes zealously enforce some of its laws for a stretch, and then relax its enforcement. A great example of this was how incredibly tough law enforcement was in the run-up to the Beijing Olympics. It is also always the case that some regions of China will strongly enforce a particular law while other regions do not. Lastly, China enforces many of its laws depending on who is violating them.  For example, it has always been the case that China (like most countries in the world) tends to be tougher on foreign companies in enforcing its business related laws. Oh, and lately, China has tended to be tougher on enforcing its laws as against companies and individuals from the United States and Canada and, starting a few weeks ago, as against companies and individuals from the United Kingdom as well.

None of the above should come as a big surprise to anyone because so much of it holds true to at least some extent for nearly every country in the world.

Right now what you need to know is that China has never been tougher in enforcing its laws against foreign companies. It is at a ten out of ten on that right now. But with respect to the United States, Canada and the United Kingdom (and perhaps a few other countries as well, like South Korea, Taiwan and Norway), it has taken it up to eleven.

And yet, far too many are not taking this seriously enough.

Less than a month ago, I wrote one of our more controversial blog posts, entitled, Do NOT Teach English in China and Why EVERYONE Should Read This. In it, I highlighted some of the problems English teachers were facing in China, including (but not limited to) the following:

I eventually concluded that it is simply too risky to take an English teaching job in China and encouraged people to go elsewhere:

I have reached the conclusion that the best thing an English teacher can to do protect themselves from the sorts of things mentioned above is not to take a teaching job in China in the first place. Go elsewhere. And if you are teaching in China now, leave now or just resign yourself to your fate. I wish I could give better advice than this but I cannot. Sorry.

I then wrote about how what was true for English teachers in China was also true for all foreign employees in China and then I concluded that post by noting how important it is for every foreign person and company to comply with China’s laws:

Living and working and doing business in China is way more legally complicated than ten years ago and tolerance of foreigners in China (particularly for Americans) is way down. This means that the likelihood of you going astray of Chinese law is considerably higher as well. When you then add in that China’s ability and desire to catch foreign companies and foreigners operating illegally in China is higher now than it has ever been, you can see why it is so critical you make sure that both your company and you are operating in China within the law. If you are not already operating legally, you need to start doing so now and if you cannot, you probably should leave China or not go there at all.  This is the new normal for China. See Want to Keep Your Business in China? Do These Things NOW.

If you are not able to know whether you are in compliance in China and thus protected, you (and your company) would be better off not being there at all, English teacher or otherwise.

I said that this English teacher post was controversial in large part because it engendered a ton of social media discussion, especially on Linkedin, on Facebook, and on Reddit (here and here, among other places).

And yet, at least three times in the last couple of weeks one of our China lawyers has received an email from a foreign company making clear that it would continue operating illegally in China either because “it has no choice” or because it has “nothing to lose.” In all of these instances, the companies were essentially correct in saying that they had no choice but to operate illegally in China because it simply is not possible for those foreign companies to operate legally in China because China essentially does not allow foreign companies to do so. These companies excused their illegality by pointing out that others operate similarly and nobody has gone to jail for doing so and these companies were right about this also.

And yet, I felt utterly compelled to warn them of their actions. And before anyone says that my compulsion arises from a desire to charge these companies money for legal services, please note that the opposite is in fact true. Our law firm does not make any money whatsoever from a company we tell we cannot help get into compliance. Anyway, the below is an amalgamation of the sort of emails I wrote:

As our firm’s chief worry-wart, I feel compelled to write.

I strongly disagree that you have nothing to lose here. I think the opposite is true.

You will be openly violating Chinese law to operate this way. China is in open conflict with the United States and your company will be violating the law in a sensitive area — the Internet — the PRC government has identified as a national security issue. Today’s New York Times discusses what is happening to Americans in China these days and the sort of mistreatment it discusses is far more prevalent than the media lets on. American businesspeople are either afraid to publicly discuss what is happening or they do not wish to do so, but we hear similar stories from American companies all the time. They usually act surprised and a little perturbed for getting into trouble for doing “the same thing we’ve always done.” When we say, “ yeah, but what you were doing is illegal” their response is often something like, “well they [the Chinese government] always did allow it and it’s not like we are the only ones doing this.”

How will it be/look if someone from your company gets detained or if you get shut down and essentially banned from China?

I worry for you. A lot. Just my two cents.

The common response to the above is a non-committal thank you.

Note this article on Taiwan stock traders arrested in Shanghai for operating without a license. This is what we are seeing: the PRC government ignores the legality issue for years and then they are suddenly cracking down. Notice also that the crackdown is not a deportation. The crackdown is arrest and jail time. People need to stop assuming the China today is the China of a year ago because it isn’t. It is far riskier in every way and this idea that you can just violate Chinese laws because that was allowed in the past or would just be met with a slap on the wrist and/or deportation must be excised. China is getting serious and I just hope that more people start realizing this before it is too late for them.

It is hard to know exactly what these 12 analysts were doing, but based on what we have seen other companies do in this space and reading a bit between the lines of what the media is saying about it, it would appear that they were making stock recommendations live and via an app and doing so without a license. If this is correct, I can tell you that there are a ton of other foreigners in China right now at extreme risk of arrest. The good news is that China can go one of the following three ways in the next few months:

What exactly should you do to avoid becoming a Chinese shut-down, deportation, or arrest statistic? What exactly does all of this mean for your company if it is doing business in China? What can you do to reduce your risks?

If past performance is any indicator of future performance — and we really don’t have anything else to go on, so we have to assume it is, even though I just said above that this is certainly always going to be true,  you should do the following, and fast:

I could go on and on. None of the above are new, but with what is going on in China today, their importance and their urgency has increased exponentially. Get fully legal. Now.

UPDATE:  Lest anyone out there truly believes China does not treat harshly the citizens of foreign countries that dare to challenge China, the below tweet from Global Times ought to extinguish that belief.  The picture is of Robert Lloyd Schellenber, a Canadian who was convicted in China of drug smuggling and sentenced to 15 years in prison, but who was then dragged back into court and ordered executed in retaliation for Canada’s having arrested Huawei CFO Meng Wanzhou. There can be little doubt that the below tweet from China’s official English language newspaper is intended to not so subtly tell the world there will be deadly repercussions for citizens of those countries that do not hew the Party line. Does this scare you? It should.

Viewing #China as an opponent was wrong and would only make #Canada meet more setbacks in bilateral relations: expert http://bit.ly/32swQyX 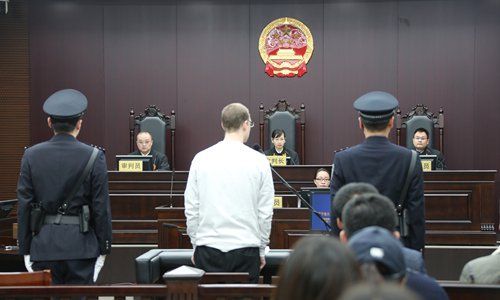